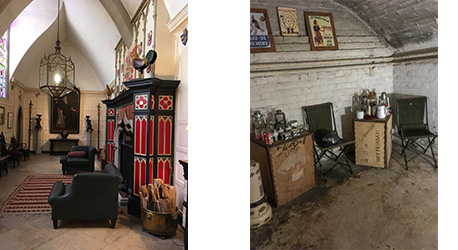 After delays due to traffic and a very wet start to the day we had a most interesting visit to Stonor Manor.  This is one of England’s oldest manor houses housing outstanding displays of portraits, tapestries, bronzes and ceramics.

It has been the family’s residence for over 850 years making it one of the oldest family residences still lived in.  The guides brought the most interesting family history to life while we toured the house before lunch in the restaurant in the manor.

After lunch we visited Hughenden Manor which is the handsome home of Benjamin Disraeli, set in a Chiltern valley where the sun made a brief appearance. It houses a fascinating collection of personal memorabilia of this colourful statesman.  Disraeli’s hillside retreat later became the headquarters for a top secret Second world war operation that put Hughenden high on Hitler’s target list. The basement exhibition, 1940s living-room and ice house bunker was fascinating bringing wartime Britain to life.

In all a most interesting day visiting two of England’s famous Manor houses.