In November 2019, the volunteers at the Herbert Museum in Coventry will celebrate NINE YEARS of volunteering at the Museum.

During their years at the museum, the Volunteers, Ruth Barton, Anne Haywood, Alex Harris and Shirley Jack, have been involved with a huge variety of projects, ranging from making underskirts for a dress exhibition at Blenheim Palace, mounting samplers, making padded coat hangers, sword covers, parasol covers and even mounting birds for the Natural History section of the museum.

Some of their more unusual projects include creating backdrop curtains for the Santa Sleigh ride at the Transport Museum and protective saddle covers for the bicycles. Dusting and cleaning the moth collection was a task that required an extremely light touch and a certain amount of newly learned expertise.

Ongoing volunteer work at the Museum involves checking, repacking and data recording all the boxes of items in the costume store. This is a fascinating occupation as each set of boxes reveals a treasure trove of history. Some of the items however seem very recently familiar to the ‘mature’ members of the group!

The museum caters for younger visitors and the team has made many items to support the Sensory Story sessions. Props for these include 150 Morse Code bean bags, a Hungry Caterpillar and a starry night illuminated sky blanket.

Lately they have been meeting again with the Transport Museum’s Christmas Sleigh ride team to plan new ‘elf’ costumes for the staff helpers on the ride. The time frame is small but if Santa can do the impossible then so can they!

Our Volunteers have been working at the Museum since 2004, and, of the six original volunteers, two are still regular members.

Here’s what they have been doing over the past couple of years in their own words.

2018 – We began the year with a new project.  In the store, there were many boxes of Victorian fashion plates requiring cataloguing.  We began by sorting them into categories: accessories, men’s fashions, women’s fashions and children’s fashions.

Each one required an accession number, a description of the scene and a photograph taking of it.  These would take a considerable amount of time and it was decided they would be revisited in between other projects.

In March, we were involved in the preparation of a quilt for an exhibition on WW11, to be held at the Art Gallery in the autumn.  We were asked to design the quilt to cover a small hospital-style bed, similar to the ones which volunteers would have made for the recuperating soldiers during the war.

Our design had a central red cross on a white circular background, set on a dark blue fabric, incorporating the colours of the Union Jack.  The corners had smaller red crosses and the borders were made from strips of flowered and patterned materials resembling chintz.  The quilt was machined and the crosses handstitched.

In September, we began another project.  Three banners were requiring repacking for storage on large cardboard rollers which were hung on cords.  In addition, some smaller items were stored in a similar manner – a silk scarf designed by Terry Frost in 1993 for the Tate Gallery, a Napoleonic commemorative scarf and a tablecloth commemorating Queen Victoria’s Diamond Jubilee.

In November, we had a visit from our new Chairman,  Shaun Pitt and Anne Flower, our HV Co-ordinator, when Lily explained about the work our group had been doing.  She had some examples of the shawls and scarves we had recently repacked on rollers.  The quilt was also on display in the exhibition.

2019 – This year we have only attended between January and March, when we were helping Sally prepare craft boxes for distribution to local schools and tracing pictures from paintings which were reproduced as colouring sheets for children.  There is a likelihood of a new project in October. 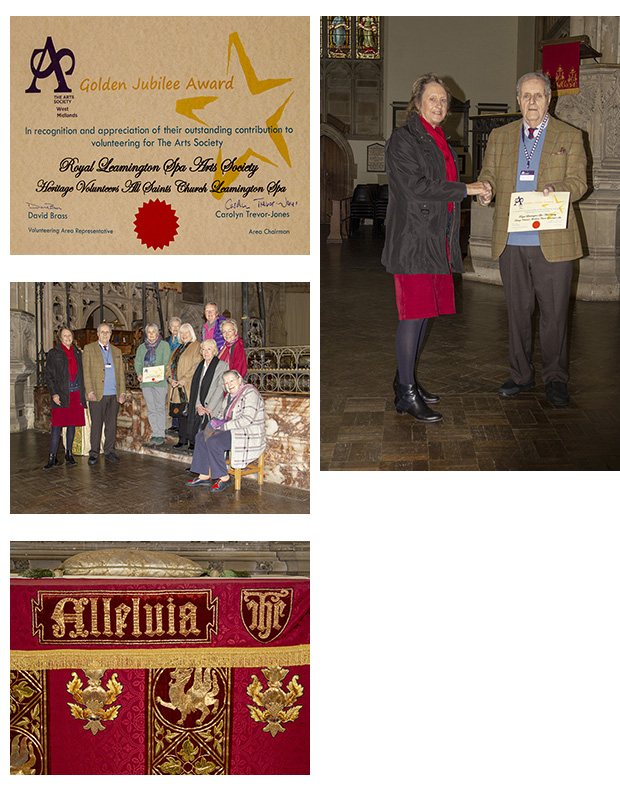 After two years and 830 hours of volunteering, the Volunteers at All Saints’ Church, Leamington Spa, have finally completed the repair work to the Church’s wonderful collection of ecclesiastical embroidery, ranging in size from small collection purses to large altar frontals.

As a result of their work, the Group has won a Golden Jubilee Award (formerly the Gold Star award), "In recognition and appreciation of their outstanding contribution to Volunteering for the Arts Society".

David Brass, the Area Heritage Volunteer Co-ordinator, presented the award to the volunteers at the church in November. He was then shown examples of the work they had carried out, ranging from large altar frontals to small collection purses.

As a permanent exhibition of the work of the Volunteers, three examples of their work will shortly be displayed in conservation display cases in the church, and a banner, with photographs of the volunteers at work, is also displayed in the church.