PLEASE NOTE: The new members’ coffee morning scheduled for Friday 2nd March has been cancelled due to the inclement weather forecast.

February is so short a month that it’s time for another update about what our Arts Society has to offer and what it’s been busy with.

First of all, I hope those of you who live in the Leamington Area saw the publicity in the Observer giving details of the Mayor, Caroline Evetts’, visit to us at the February Lecture Meeting. They were very quick off the mark with their story, complete with picture (see below), and I thank our publicity team, Judith Gallimore and Felicity and Hugh Furber for getting it into the press. She very much enjoyed the lecture and who knows, may yet join the Society.

Ann Pitt will be selling tickets for the Day Visit to Oxford at the next Lecture Meeting on March 7th so please bring a cheque book if you want to join the group. It should be very interesting as it will be taking in the New College Art Collection as well as a visit to the Ashmolean. There will be lunch in the lecture theatre at the Ashmolean, followed by a private lecture, which is not available to the public, on the history of the museum and its collections, after which, charged with what you have learnt, you will be free to explore the museum. It sounds a very good trip and I hope you are tempted to sign up. Tickets will be £45.

Next month, we shall be selling tickets for the Bi-ennial Dinner in June. This event is also going to mark the Golden Jubilee of The Arts Society and our own Silver Anniversary which will be in October this year. It will be a wonderful venue for such a celebration, so do mark Wednesday 13th June in your diaries and remember that we shall be selling tickets for it at the April and May Meetings.

There are still a few places remaining for the Short Break to Yorkshire: September 21st to 25th 2018. Please contact John Clark on 07973 322159 if you want further information or would like to book. The cost is £560 and is for 4 nights in the Majestic Hotel in Harrogate. The trip will take in Newby Hall, Harewood House, York and the Minster, Fountains Abbey…..and much more, including, of course, Betty’s Tea Rooms!

Those of you who supported the Joglaresa concert on February 20th will know what a superb evening it was and how vibrant their playing turned out to be. The young musicians seemed to be enjoying themselves as much as the audience, as we were treated to songs in mediaeval Spanish, Arabic, Judeo Catalan and more, played on modern replicas of ancient instruments including fiddles with five strings, and two harps, not to mention pipes made out of a sheep’s hide and all sorts of tambourines and drums. It was marvellous to see so many Arts Society members in the audience and we went home a happy and merry band, pleased to have been a sponsor of this concert.

I look forward to seeing you at the March Lecture Meeting on 7th March when we shall be learning about ‘Painters of Provence’ courtesy of Ms Juliet Heslewood – a lecture which is designed to tie in beautifully with our trip to Provence in April.

I look forward to seeing you there,

Mayor Caroline Evetts attended a talk on ‘250 Years of the Royal Academy of Arts, London’ at the Royal Spa Centre.

She was welcomed by chairman Elizabeth Hunter and treated to lunch following the talk. 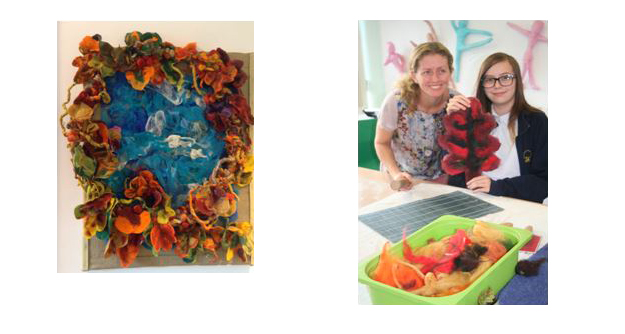 At the beginning of December 2017, Round Oak School saw the unveiling of a colourful, new piece of art work in the school’s entrance hall. It was made by over 100 pupils working with textile artist Jacqui Smithson.

Jacqui worked with groups of children over four days, teaching them about the history of felt and how to make it using Merino wool, silks and threads. Inspired by the environment around them and by the name of the school, the felt was formed into leaves, acorns and twigs. This project was particularly appropriate for the pupils who have learning difficulties ranging from moderate to severe. They were encouraged to talk about the materials as they enjoyed the tactile experience.

We were very fortunate that we were able to obtain a grant from the Patricia Fay Memorial Fund towards the project, the balance being met by our Society.